Last week I attended the final session of a public dialogue on community rights and wellbeing, supported by Sciencewise and organised by the New Economics Foundation, the Cabinet Office and Hopkins Van Mil.

It was a boiling hot summer’s evening in Kennington – the kind of stifling heat that social psychologists have long associated with a tendency for public rioting.  Would we see tempers fray as members of the public got to the nitty gritty of the community rights agenda?  Would it be possible to bring together a coherent conversation with such a diverse group?  Would the policy makers attending the session find themselves encircled by a braying pack?

Thanks to some excellent facilitation, open and informative responses by the policy makers and the good humour and commitment of the members of the public who took part, the evening proved a very fruitful exploration of the issues.  I learnt a lot from Henrietta at Hopkins Van Mil about how to keep a wide ranging and potentially divergent discussion on track.  Her pre-emptive “I want to give you space to” when addressing a particularly talkative participant was a master class in how to avoid the discussion becoming derailed without devaluing the person’s contribution.

There were plenty of challenges for the policy makers present, and several participants voiced their frustration that the rights of communities are not better known.  They called for more to be done to publicise these rights, and strongly backed the importance of forums like the one they had been part of (many were sad to see the dialogue come to a close, in fact).  The small group I was with carved out their main message to government as ‘listen, care, help’.  It wasn’t enough for community rights to exist in the abstract:  the government needed to listen to people, demonstrate that they really cared about the issues and provide practical help to make rights a reality. 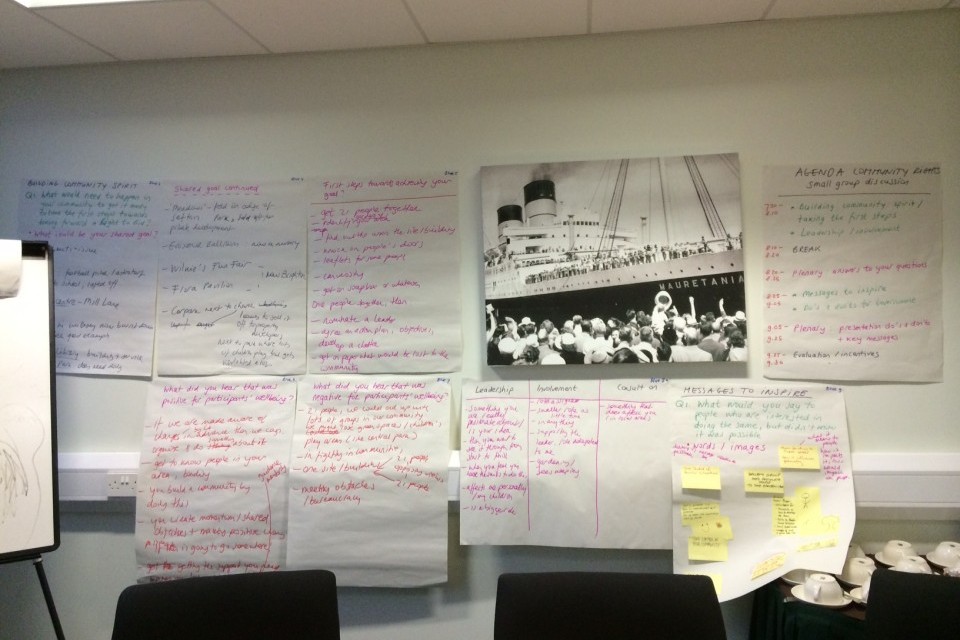 I was struck by how different it felt to have these challenges aired in a room, directly with policy makers.  The energy would rise and challenges would become more intense, and then a wave of humour or a response from a policy maker would diffuse things.  At the end of the session one of the participants who had made some of the most pointed criticisms came up to shake each of the policy makers and facilitators by the hand, and said how much he had valued the session.  How different that interaction would have felt, from both sides, had he been making his points through a series of emails.

Sitting on the tube on the way home, it felt very special to glance around the carriage and see a few now familiar faces sitting amongst the other passengers.  Most of us sit in silence with the public every day, but it’s a very precious opportunity to really talk together.

(Cross-posted to the Sciencewise blog)
Tell us what you think in the comments below, on twitter, or on LinkedIn.