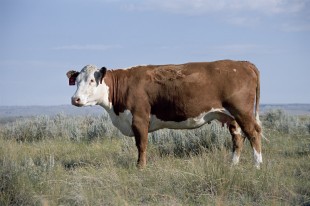 In early 2009, the Animal Health and Welfare Division (AHWD) in the Rural Directorate in the Scottish Government was tasked with developing a policy to:

OTF status would be beneficial to farmers. It would lead to a routine tuberculosis (TB) surveillance programme that would have financial benefits to both the farmers and government. It would also mean fewer restrictions on live cattle exports to countries in the EU. The Scottish government would also benefit as since the devolution of animal health budgets, it has been liable for paying official veterinarians to test these herds.

To be gain OFT status, Scotland would have to meet the following 4 conditions:

What was distinctive about the approach?

The AHWD knew from previous assessments of Scotland’s TB prevalence that although Scotland has a very low and stable prevalence of bovine TB, the dozen or so new cases in Scotland each year were sufficient to take Scotland above the qualifying threshold. Scotland satisfied all other criteria to qualify as OTF.

The AHWD firstly decided to look afresh at existing TB prevalence data. It became clear that the majority of new TB cases in Scotland were the result of importing cattle from high incidence TB areas elsewhere. These cases had nothing to do with the domestic TB prevalence and the team realised in light of this, they could lobby the EU Commission to exclude these ‘imported cases’ from the annual OTF assessment.

However, before the AHWD decided to present their evidence to the Commission through an application for OTF status for Scotland, they decided to liaise with commission officials from an early stage. This ensured that the team understood the requirements and expectations of the EU officials before drafting the application.

When the AHWD submitted the application, they were able to show that they could convincingly identify and separate imported TB cases from domestic cases. The team was also able to demonstrate precedents where EU law already allowed such an approach for other diseases such as brucellosis. As a result, the EU Commission agreed that Scotland could exclude imported cases from the annual OTF assessment.

The Scottish government wanted to be in a position to maximise the benefits of OTF status for farmers and the government, should their application be approved. They sought to rationalise the routine TB surveillance programme in Scotland which would bring a number of benefits for both parties. To do this, the AHWD would have to design an alternate surveillance programme that maintained testing sensitivity – rapidly detect new outbreaks – while still exploring the options for a more targeted, risk based approach. They wanted to understand whether some herds were more risky than others and whether some low-risk herds be exempt from routine testing.

The AHWD recognised that it did not have the required resources or expertise to address this question in-house. The government commissioned independent research (£100,000) from Glasgow University in March 2010 and provided them with years’ worth of data for examination. The academics also acted as independent third party auditors of the evidence base. The University was asked to produce options for a more effective, targeted surveillance programme. This could make savings for government and farmers alike, without significantly affecting the government’s ability to detect tuberculosis quickly.

How did this approach improve the outcomes?

In September 2009, the EU’s Standing Committee on the Food Chain and Animal Health awarded Scotland OTF status. This was a direct result of the AHWD’s decision to exclude imported cases from the annual OTF assessment, which was itself helped by their productive engagement with EU officials.

In June 2011, Glasgow University published its report Risk-based Surveillance for Tuberculosis in Cattle. The report recommended a new strategy for the AHWD to take forward. One recommendation was that 30% of Scottish cattle herds should become exempt from routine four yearly TB testing by 2012. The report indicated that this new approach would have significant savings for both industry and government, while maintaining targeted routine 4 yearly testing.

The implementation of the recommendations from the Glasgow University report has rationalised the routine TB surveillance programme and maximised the benefits of OTF status for Scottish farmers. The academic research is central to this achievement and re-affirms the Scottish government’s decision to engage academia after it recognised that it did not have the resources or expertise to conduct the research in-house.