Following Virpi's post earlier this week about the Change Agent Network in Finland, we're delighted to welcome Elke, Nancy and Joke on how they are fostering innovation in government in Belgium.

It all started a couple of years ago. Some crazy civil servants  founded a group called Club 35 to unite young civil servants in government. They shared ideas about how government can be more innovative and flexible. The young group created a vision about “civil servant 2.0”, a civil servant connected to the world and proud to be an ambassador of his organization. 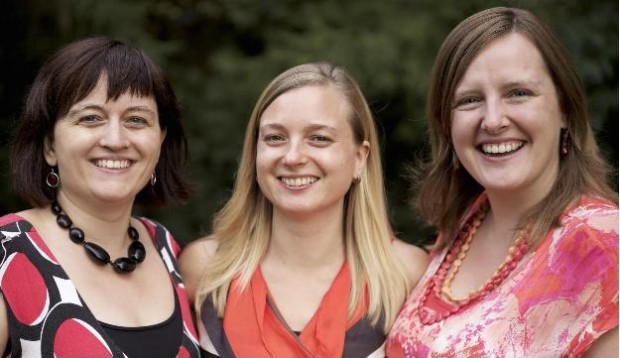 Nancy, Elke and Joke were some of the early adopters of Club 35 and they dreamed of going further. They wanted to write a book about dinosaurs in government and how to get rid of them. Dinosaurs are not grumpy old grey men, but outdated habits. During their activities as managers, they clashed from time to time with the system: top management that wasn’t very keen on change and trying to keep things like before. Nancy, Elke and Joke wanted to talk about what’s really happening inside the government and how you can make it better. They wanted to create a movement of Dinobusters challenging dinosaurs to innovate.

The young women signed a contract with a publisher and started writing their story. They interviewed politicians, civil servants and top management in order to collect interesting stories and views. After the launch of the book in 2014 they received a lot of reactions. Talking about government and politics is sometimes a taboo: for example, the way political appointments happen at top level versus the procedures to recruit new civil servants, which are done more objectively. The book set out how government works, which makes it easier to think about solutions.

One of the most important impacts of the publication of the Dinobuster book was that civil servants discovered what is happening in other governmental organisations. Most of the time civil servants are working on projects (for example The New Way of Working) without knowing other parts of government are doing the same. Sharing knowledge and ideas, building bridges, and thinking together are some of the most powerful ways to make things more efficient and less expensive. And in 2015 it’s of course a lot easier to share knowledge through social media, horizontally, without a “boss” allowing you to do so (or not).

Some organisations started their own Dinobuster group to trigger innovation. Different policy workers are getting together to clear out problems and challenges. Dinobusters are organizing workshops and summer classes about how to communicate through social media or what the key factors of change mangement are. In that way civil servants have their own survival kit to face change in government.

After the publication of the book, the three authors realized that the need for dialogue between civil servants, politicians and top management is high. Their perspectives are different, but their needs are about the same. This insight stimulated the Dinobusters to set up interventions between different (internal) governmental stakeholders to talk about challenges on a safe way.

The Dinobusters started to create a digital magazine (one is even in English) and different tools to support the interventions. 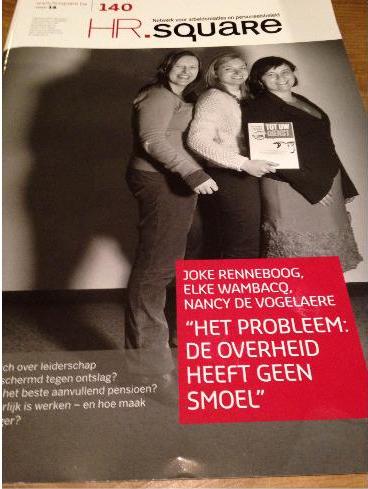 Wondering how you too can become a Dinobuster? We are convinced anyone can change the organisation from the inside - you too :-).

It’s very easy. You have to overcome your own barriers against change and learn how to be and stay honest - towards yourself, your environment, your organisation. To make it a little easier on you all, we made an infographic with “the 10 laws of the Dinobusters”.  That should make clear what dinobusting is all about… Have fun, let’s get started and… keep on innovating! 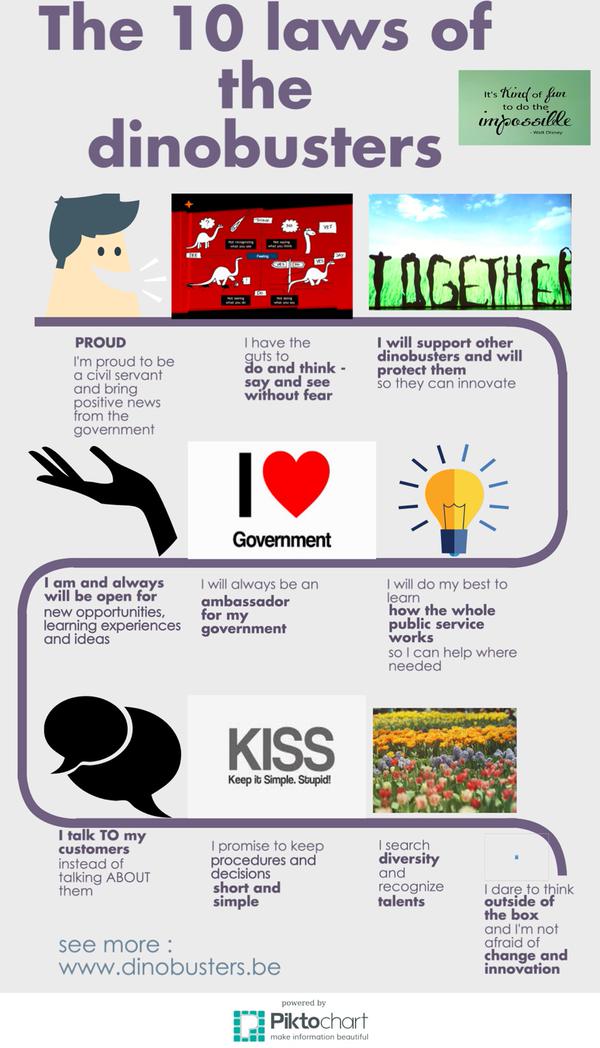