Cities can be excellent laboratories for innovating and developing new ideas. When Foresight asked cities about the challenges they were facing, retaining a high skilled labour pool emerged as a key issue.   Using evidence on graduate mobility and productivity as a starting point, the Foresight team in the Government Office for Science facilitated a collaborative project between cities, universities, employers and national government departments. This place-based open policy making experiment led to the development of five initiatives to help deliver local and national priorities of productivity and regional rebalancing, through prototyping and trialling ideas in UK cities.

Open policy making practice promotes listening to new ideas and engaging people to gather new insights to help to see problems from a different point of view. The Foresight Future of Cities Project has worked with cities across the UK, carrying out regional seminars and workshops to understand the trends, challenges and opportunities for cities today and in the future. An issue repeated by cities during these visits was the perceived movement of graduates to London.

An important strand of the open policy making agenda is about using a broader range of evidence to inform policy. Foresight commissioned The Bartlett Centre for Advanced Spatial Analysis (CASA) to analyse graduate flows across the UK. The analysis showed interesting results regarding the location of graduate movement and how it compared between different cities (e.g. see Fig 1). Primary research was also commissioned to survey employer perspectives on issues like sought after skills and the experience of recruiting graduates.

Fig 1. Graduate flows to London and Bristol for employment as % of graduates from Higher Education Provider. 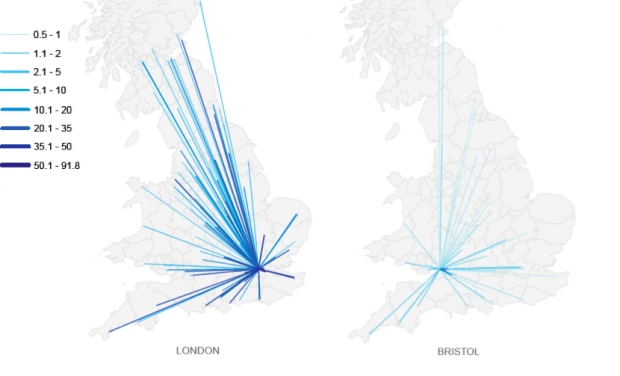 A theme running throughout the open policy making experiment was that collective understanding provides a strong basis for the development of policy ideas. As a pathfinder model for local and national governments working together, Foresight formed an action group to allow partners to consider the evidence and solutions collaboratively. The action group included national government departments including the Cabinet Office, HM Treasury, the Cities and Local Growth Unit, universities and the six cities themselves, Birmingham, Bristol, Cardiff, Leeds, Liverpool and Manchester.

The action group brainstormed a long list of ideas, responding to evidence and experience, to address different aspects of the issue. These were then refined to produce 5 ideas which participating cities are able to take forward as demonstrator projects at the local level:

Evidence-based idea generation is a central idea within open policy making. Foresight can bring this evidence. By thinking about how these processes play out in local contexts, allowing pilots and trials to inform further iterations of the ideas, this project shows the potential of open policy making in place. This takes collaborative ideas out of the abstract and into every day contexts where they can develop further. Both the practical project ideas and the model for place-based open policy making could be further replicated to explore other city policy issues.