By Carol Pizatto: Policy Lab is known for its diverse team of analysts, ethnographers, policy makers and last, but not least, designers like me. The team has also appointed the world’s first Policy Designer - as lobbied for by former ‘labber’ Laurence Grinyer. So combining design and policy is at the heart of Lab, and I wanted to share some of the lessons I’ve learnt in the eight weeks I (a designer and civil service newbie) spent there.

Lesson #1: Be prepared for the 'wicked' problems. Policy design is more than service design. Policy is not a simple set of steps - problems have multiple casualties and are changing all the time. To succeed means to engage multiple actors into the right mindset.

A great example of this was our recent session with the Department for Transport to consider government’s role in Smart Shipping. Eighty-five people gathered at the Norton Rose Fullbright. Our first challenge was working out what the question really was - a key part of design but something policy-makers, under pressure to deliver, can skip over. Together, we thought about the people we were designing for: who were they; what had been their experience so far; what were their hopes and fears? This helped us define the challenge. Then we looked at different ways of addressing that challenge and explored the resources we’d need - and who should be involved.

So, we can build energy and excitement in one day, and get lots of ideas going. But how do we turn that into policy? 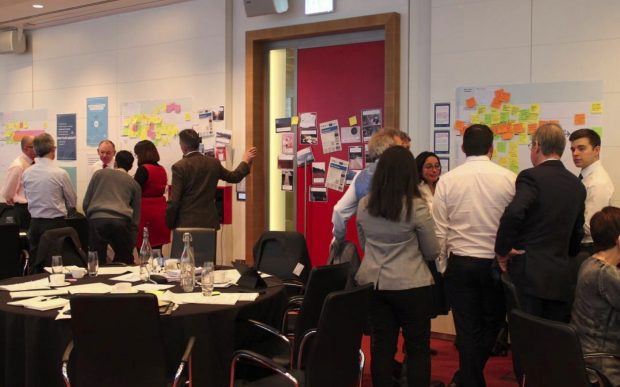 Lesson #2: policy makers often feel more comfortable dealing with a scientific approach than a cognitive argument based on people’s actions and behaviours. However, it is the combination of both that delivers excellent ideas. Designers bring flexibility and creativity that policy-makers could learn from. Policy-makers remind designers that Ministers need the hard evidence too. 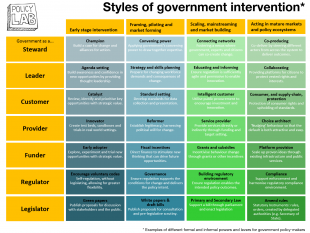 It is this combination that inspired the transformation of our grid of 28 styles of government intervention into a set of cards which were tested in our session with DfT. We made these cards to push policy-makers to think bigger about the potential levers available to them. But during testing we realised they were also useful to inform, guide and engage other stakeholders in the ways policy can be delivered by Government. We posted the cards to slideshare yesterday - please try them out! 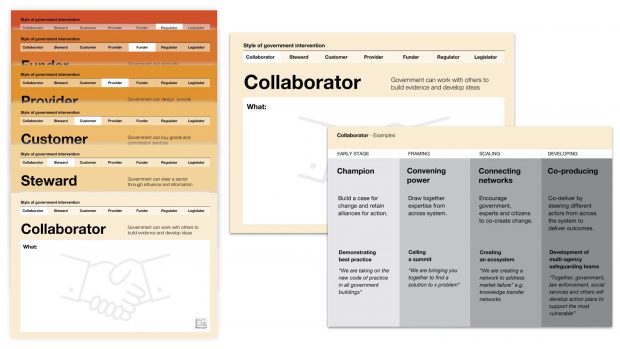 You could argue that by providing these options, we narrow the scope for the very creativity we hope to spark. But experience has told us that it often has the opposite effect: the limitations are based on evidence and research, and combined with other Lab techniques help reach that creative ‘sweet spot’ Beatrice blogged about last week. And of course the set is still a prototype - it will never really be finished - so please keep giving us your feedback. 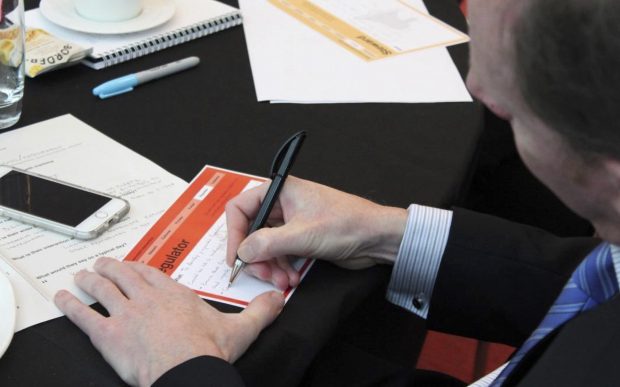 As a designer, I wanted to make policy-makers’ creative exercise easier and simplify the tools as much as possible. I used our emerging policy-making map (Vasant will blog about this soon!) and guides made by the Policy Profession to understand the system in which they operate. That’s when I encountered lesson #3: Designers seek simplicity, but in policy there is no such thing as simple. So your role as a designer should be as navigator: creating new paths or helping find the way through existing ones, rather than simply simplifying.

My short time in Lab didn’t give me all the answers. But it did reinforce to me the role of designers as facilitators - how we might help structure discussions, encourage user-centred perspectives, inspire new thinking, and what we can learn from the messy, complex and fascinating world of policy.

Carol Pizatto is now a Service Designer at Ministry of Justice User-Centred Policy Design Team.  Carol worked with Policy Lab for 3 months as a designer.