At Policy Lab we are always interested in finding new ways to improve policymaking. We think that future public policy should be more open, inclusive, evidence-based, empathetic and informed by both present and future needs. We also think it is important to share the lessons and tools that we have developed over the years through our practical projects.

In late February Matthew Taylor, Chief Executive of the RSA and I ran a workshop to test Policy Lab’s new ‘Government as a System’ toolkit at the UK Policy Profession’s annual Policy Excellence Group. It was our first opportunity to expose Policy Lab’s latest tool for systems change with some of the most senior UK policy officials. The RSA has been leading thinking on how to ‘think like a system and act like an entrepreneur’, and at the session Matthew was able to take this idea further to ask what good process and bad process looks like in policymaking (his latest blog on this is worth a read).

Following the session, this week I was invited to speak in Canada at the annual Policy Community Conference. Canada was the first opportunity to share publicly this new ‘Government as a System’ toolkit.

Having delivered over 50 projects in Policy Lab over the last six years, it is clear to me that the way we work, the processes we deploy and the tools we apply can be codified. Our theories and insights are always grounded in practical projects, through our work on the ground with policymakers and communities. Every year we reflect across our projects to see if there are more general themes or tools that could be codified and shared with the Policy Profession and wider network.

We also really value working in the open, sharing what we have learnt and building on other people's ideas. There is an international community of innovators developing new thinking and we try to share as much as we can to help build the wider field. Sharing on this blog and in the Open Policy Making Toolkit is one way we do that. So I am really excited to share our latest ‘Government as a System’ toolkit in this blog.

Where did the idea for 'Government as a System' come from?

Over the last few years we have been testing a model to describe different kinds of government influence – we initially called this framework ‘Styles of Government Action’. It has helped us to reveal the different government levers or styles of action that policymakers use when developing new ideas for policy.

In our original framework (shown below) there were 28 different levers or actions that could be used by policymakers to influence different outcomes.

I blogged about this back in 2017 looking at the difference between policy design and service design.  We have found it was useful to set out the different ways that government operates, from harder more interventionist actions like creating laws, to softer more collaborative approaches such as convening people around a topic of shared interest. The framework has evolved over time, with tweaks to the language, as we’ve tested it on the National Civil Society Strategy, The Local Industrial Strategy, the Maritime Technology Strategy, as well as many of our other projects.

We have learnt about how this tool has been used by policymakers across the system. Some like to use it to have honest conversations about what types of action are in- and out- of scope. Others use it to think more broadly, exploring different types of action that they would otherwise not have been prompted to consider.

Since its inception, we have been extending it to different projects and contexts, including Annie Norman’s recent adaptation for international interventions and Camilla Buchanan’s work exploring the role of design in foreign policy. We have seen it translated into different languages and adapted by other governments and organisations. For example the Open Data Institute (ODI) created an international version for interventions to boost trade competitiveness and Cat Drew, Noel Hatch and David Ayre ran a session to create a local government version. Nesta also tested the original framework to define specific and concrete ways in which government might play a role in partnerships at different stages. And In July 2019 we also used the framework in Canberra supporting Australian and New Zealand public servants on the States of Change public innovation programme.

Whilst the reaction from policymakers to the tool was positive as it helped people ask the right questions, they felt more could be done to enable better partnerships and to help policymakers work with complexity. I have drawn inspiration from these interpretations of the first framework and wondered if there might be a way to really capture action across the whole system - hence creating ‘Government as a System’.

As someone who has worked in local government, central government and NGOs, I have become increasingly convinced of the value of more joined up policymaking across the system. It was therefore important to me to ensure that the new version of the framework responded to both the adaptations already made by others, as well as making a step change improvement in its usefulness. This means working more openly across boundaries with partners and citizens to deliver 21st century public services through new and emerging methods.

What is government as a system?

The new toolkit crosses local, central and international government action.  It has many of the elements of the previous framework but also covers new ground. The most obvious is that we have changed the horizontal axis to better reflect the way government works in practice. This has meant including a number of new areas namely, influencing, engaging, designing, developing, resourcing, delivering and controlling (or managing).

The vertical axis still follows the same logic from ‘softer’ more collaborative power at the top, down to more formal government power at the bottom of the axis. The update includes many familiar things from nudging behaviour to convening power and also adds new areas like deliberative approaches such as citizen juries.

When looking across the whole system, it now has 56 distinct actions. Of course this isn’t an exhaustive set of options, you could create more and more detail as there is always more complexity and nuance that can be found in government. Importantly, we want policymakers to be considering how multiple levers are used together to address complex problems.

As before, and with all our work, this is initially a draft, a prototype. We fully expect to iterate and change it over time. We also invite users in different contexts to test it and welcome your feedback on what works and what doesn't.

Building the Government as a System toolkit was in itself revealing. It shows a potentially helpful sequential process behind government action at local, national and international levels. This now forms the horizontal axis of the new framework, as shown below. 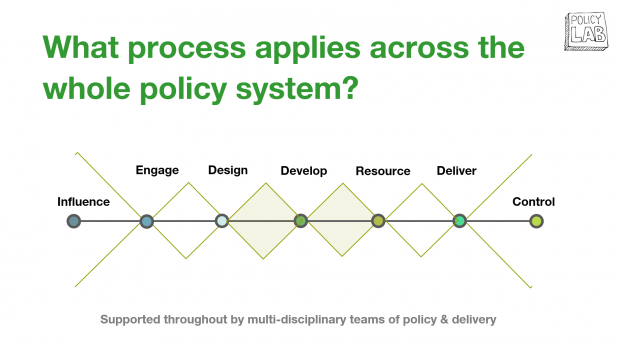 In my session with Matthew Taylor, he noted the importance of process in creating successful policy, noting that:

Policy Lab broadly uses the Design Council’s Double Diamond innovation model in our approach to projects, so it was interesting to see how this new framework added new steps. My recent blog for the Design Council also reflected on what this means for policy design.

From this new framework we have gone further. The screenshot below shows a simpler version of the framework, stripped back to the just the actions, from which we can see the patterns of action more clearly. 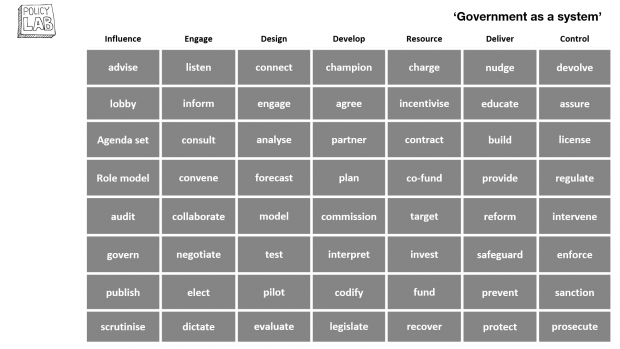 We have used this to build an interactive tool (this link is to an animation demonstration) and we’ll soon be publishing a Trello version so that we can share it more openly. The interactive tool was both helpful to test the model and to demonstrate different use cases where this framework can be used in practical workshops to help policymakers and others develop new ideas and thinking.

These tools are currently in draft format and so we fully expect them to change. So far we have tested fourteen different themes for this system from ‘engaging citizens’ to ‘net zero’.

What do you think?

We are running a number of sessions on climate change later in the month, as well as different ‘Policy School’ workshops where we will test and adapt the draft framework and tools. We hope our toolkit can be useful to help foster greater collaboration on the issues that cross local, central and international government contexts.