The Climate Change Act of 2008 committed the UK to cutting as much as 80% of greenhouse gas emissions by 2050 (relative to 1990 levels). The Strategy Directorate at the Department of Energy and Climate Change (DECC) was tasked with looking at how the country should make the transition to a low-carbon economy. The team knew that meeting the target would require all-encompassing change, affecting the types of power stations that are built, the cars that we drive, the way that we heat our houses and the decisions that we make in our daily lives. However, a lot of the technology needed to achieve these targets was still in development, making these considerations difficult.

To help policy makers understand the uncertainty and complexity underpinning energy policy, the team built a model of the energy system: the 2050 Pathways Calculator. Although the team routinely used models to inform decision-making before, these were typically used to produce optimal systems.  This time the team wanted to build a model that could inform a debate rather than identify a specific solution.

The finished model allowed people the chance to easily and quickly make decisions about energy demand and supply (for example how many nuclear power stations we build, or how much we insulate our houses) and to see the impact these would have by 2050. For the first time, the team published the model and its evidence base online, making it possible for all interested parties to engage with the policy development process.

The model was developed iteratively with experts, giving it the reliability and credibility needed to create radical change in energy policy

The team was originally concerned about publishing the model: some of the options were not strictly government policy, some of the pathways were unaffordable, and there was also a risk that press and pressure groups could be critical and use results out of context. However, none of the risks that the team had been concerned about materialised and publishing the model has helped the sector make significant progress: it provides a common language to talk about the energy sector which has helped make the debate more constructive.

When developing the model, experts were given the opportunity to recommend changes to it or challenge its evidence base. A wind expert pointed out that the team hadn’t considered floating wind turbines, while a number of organisations pointed out that hydrogen was not included as a fuel source for transport. The team was able to make those changes to the model which meant that there was broad agreement by the time it was published as a final version. This gave the resulting government policy more credibility than it would otherwise have had.

Many of the lessons learned from the Calculator are now an integral part of DECC strategy and policy. For example the model demonstrated that the UK may need to double its electricity use by 2050 and this has been a key inspiration for the Electricity Market Reform programme, which aims to encourage investment in low-carbon generation. 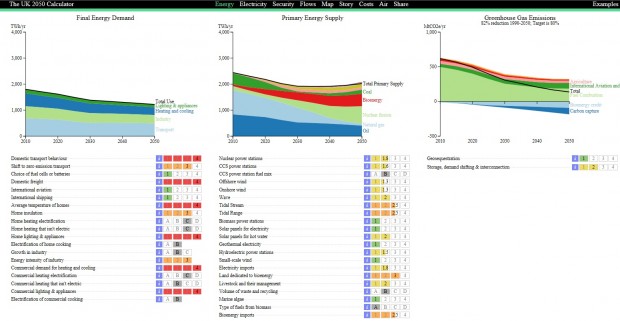 The team has won two Civil Service awards for the work, the first in 2010 for science, engineering and technology and the second in 2013 for the analysis and use of evidence for its international outreach work. The Calculator was also recognised in the Macpherson report into Government analytical modelling as setting “a new standard” in transparency.

The 2050 Calculator was the start of broad, international engagement on energy policy

Because it is open, organisations like National Grid and Friends of the Earth have been able to use it to make their own plans, and it has been used in universities as a teaching aid. Seeing the potential in the Calculator, Sciencewise-ERC approached DECC to build a simplified, game-style version of the model to help the public – and in particular children – engage with the policy development process. The My2050 website was launched in 2011. Over 17,000 people have expressed their preferred solutions through this website. 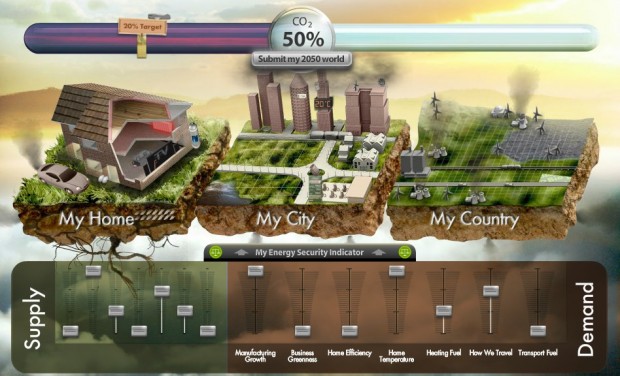 DECC is working with the Foreign and Commonwealth Office (FCO), UK Embassies and the Department for International Development (DfID) to help other countries build their own calculators to inform their energy and climate change policy. China, India, South Korea, Belgium and Taiwan have already published theirs, and 13 other countries are in the development stages.

The team is now leading work on a Global Calculator to help generate debate ahead of crucial climate change negotiations in 2015 when countries will try to reach a global deal.

How did the team go about their work?

The team’s extensive stakeholder engagement at the model development stage meant that it was not such a risk to open up their work. The team engaged with over 100 experts in DECC, other government departments, academia and industry to identify the key approaches to transitioning to a low-carbon economy and the impact that these would have on emissions. The product reflected the key findings from these engagements.

Although the team had modelling skills in-house, their ambition to make the model accessible and engaging to experts and other interested parties required them to go above and beyond their usual standards. The modellers spent additional time testing and refining the user-friendliness of the model and meticulously recording the reasoning behind their work to ensure that all evidence could be traced back easily. The team also developed a wiki page for users to leave comments and suggestions about the project’s methodology and usability, or report bugs.

The additional work paid off: the team received over 100 responses which helped them improve the Calculator. One of the improvements involved adding the costs to society associated with different pathways in the Calculator.