Policy Lab is bringing design thinking to Government. It's about connecting civil servants with outside design experts and upskilling civil servants themselves. Following a really successful collaborative workshop on police digitization where Sean Miller ran an excellent prototyping session, I thought I had better learn how to do it myself, and went back to school to a service design masterclass at the National College of Art and Design in Dublin. 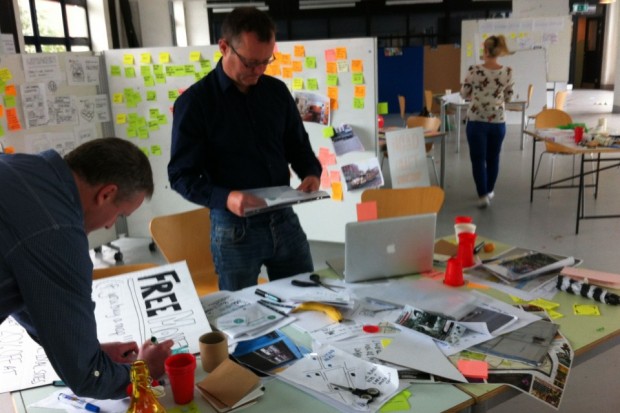 There are more photos on the tumblr of the three days.

At the start of the three days, we were asked to think of a really great service. People suggested things from Airbnb, Halo and Amazon – services that met a need, and that were good value, convenient and easy to use. And bad services? Airlines that delivered you to an airport that was not your destination (twice), telecoms companies that passed you from department to department and public services that were delivered without an ounce of empathy.

Services do not exist on their own; they are co-created with a user. Taxis or hotels cannot work without customers, nor a health service without patients. They are made up of different interactions – or touchpoints – between the user and the service. Service design makes sure these are ‘magic moments’ and not ‘points of pain’.

It works by observing, experiencing and mapping out how people use a service, using this and other creative skills to come up with an idea for a new or improved service and then prototyping it – mocking it up, trying it out and getting feedback to develop it further.

Hitting the streets of Dublin

As it is all about designing by doing, it was no surprise that we were expected to learn by doing. At the start of the course we were set the brief to develop a new off the beaten track experience for tourists visiting Dublin. Three days later, there were four proposals for new services, which had already made a total of £105. I had also met and worked with some fascinating people and learned a lot about service design tactics:

The week provided me with great new skills, experience of how you apply them to a real-life problem, and a great network of Irish designers. I’ll be able to use them as we enter the police digitization or family mediation projects, or when we go to talk to departmental policy schools about user-centred and service design.