Set up in April 2014, Policy Lab brings new tools and techniques, new insights and practical experimentation to policy-making. This second demonstrator project has over the past two months resulted in learning about how policy professionals can work in a more open, user-centred way to engage with others and generate novel solutions to policy issues.

The project, with the Ministry of Justice (MoJ), is concerned with family mediation during divorce and separation. Public funding has been available for mediation since the late 1990s. In April 2013, the implementation of the Legal Aid, Sentencing and Punishment of Offenders Act (LASPO) removed the availability of Legal Aid funding for people to access legal advice and representation by a solicitor when they get divorced or when families have disputes over money and/or children. It was expected that mediation volumes would increase following these changes but, possibly due to the removal of the main referral route to mediation (via a Legal Aid lawyer), there were actually 17,000 fewer MIAMs and 5,000 fewer mediation starts in 2013/14 compared to 2012/13.

A further development was that there were 30% more family cases (18,500 cases) in 2013/14 (post-LASPO) where neither party had representation, compared with 2012/13 (pre-LASPO). In the first quarter of 2014, 80% of all new family court cases had at least one unrepresented party. There is concern that people representing themselves in court delays proceedings. It can make the experience more stressful for families and may reduce equal access to justice.

Partly in response to these concerns, the Ministry of Justice had made two policy changes. Firstly, it became mandatory in April 2014 for separating couples to have a MIAM before going to court to settle disputes. Then in November 2014, funding became available to pay for both parties at this first meeting if the one of them is eligible for Legal Aid. 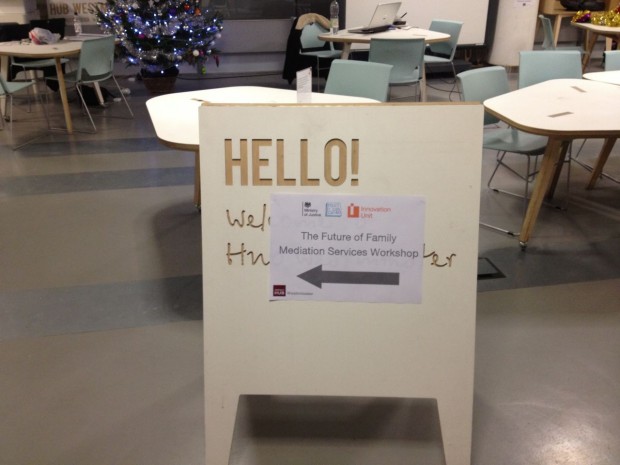 Within this context, the MOJ family mediation team had two goals for the Lab demonstrator. They wanted to understand the experiences of people going through separation and divorce, and they wanted to use these insights to explore how family mediation services could be redesigned to better meet people’s needs.

For Policy Lab, this demonstrator was an opportunity to try out three things: using ethnographic research to shape policy making; engaging a broad network of stakeholders in creating policy; and accessing expertise from a specialist agency, the Innovation Unit. 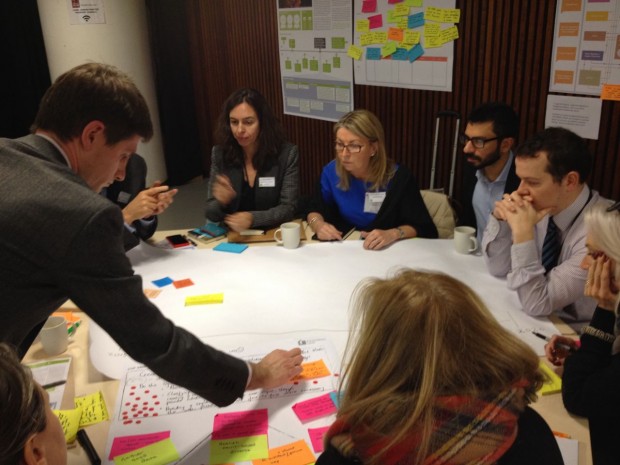 A project team including the MOJ, Policy Lab and Innovation Unit staff worked together closely over 10 weeks. Key activities included:

The next steps of this project are for the MOJ family mediation team to work with Policy Lab and the Innovation Unit to make sense of the large volume of insights, problems and opportunities generated in the workshop, as well as other research findings. This will require prioritising which ideas to take forward via prototyping to explore and test aspects of the future visions in more depth. The MOJ will also host a follow-on workshop to engage with stakeholders within the family mediation sector to advance a collective discussion about ways forward – continuing the department’s move towards towards a more open, engaged way of making policy.

The main findings from the Lab’s perspective are in three areas.

The project gave us some insights into the potential value of ethnography in policy-making. It was centred around people's whole experience of divorce or separation, not just their interactions with mediators or lawyers. The research explored what it was like for people now, and the creative activities in the workshop proposed what it could be like for people in the future.  Unexpected insights included that some people going through separation and divorce lacked confidence in their ability to make decisions about their futures.

Reconstituting the issue of family mediation.

Another result of this project was to shift from seeing policy-making as primarily as the province of the MoJ towards a collective activity in which many actors and different kinds of expertise needed to be involved. The project constituted policy-making as a complex configuration of socio-cultural, organizational and technological actors, processes, data and resources – more of a living system than a mechanical object with inputs, outputs and policy “levers”.

Starting and ending with people’s lives, not government-funded or delivered services, as the driver to innovate.

Finally, this Lab project looked broadly at people’s lives, not just as users of mediation or court services. The ethnographic research focused on people’s relationship breakdown stories. This starting point allowed the researchers to discover a range of actors, activities and identities involved including family, friends, colleagues; professionals such as solicitors and mediators; other public services (such as the police, in one person’s story or a GP, in another); as well as material and digital artefacts such as bank statements, and resources such as Wikivorce or Netmums where families and professionals share knowledge and opinions. The future visions created by workshop participants reconfigured these into new combinations. Taking people’s lives, not services, as the starting point resulted in policy making being oriented towards innovation rather than service improvement, where innovation is understood as reconfiguring societal and public resources to achieve outcomes for the actors involved.

This demonstrator helped Policy Lab experiment with new tools and techniques in relation to one complex policy issue. It demonstrated how open policy making takes practical steps to broaden the range of actors involved in researching and analysing an issue. It also engaged people directly in coming up with principles and visions shaping new policy and service solutions. This changed the conversations with stakeholders in the sector, who were rendered as collaborators in a collective innovation process. It showed how using ethnographic analysis resulted in new insights, which reframed the policy issue from the perspective of people’s experiences. These insights highlighted the contexts shaping their needs and attitudes towards specialist services such as mediation and legal advice and their behaviours during divorce and separation. Finally, this project generated principles and visions for supporting people going through separation and divorce. These underpin the next steps of the project, to prototype services and system changes through which people can craft new family arrangements.